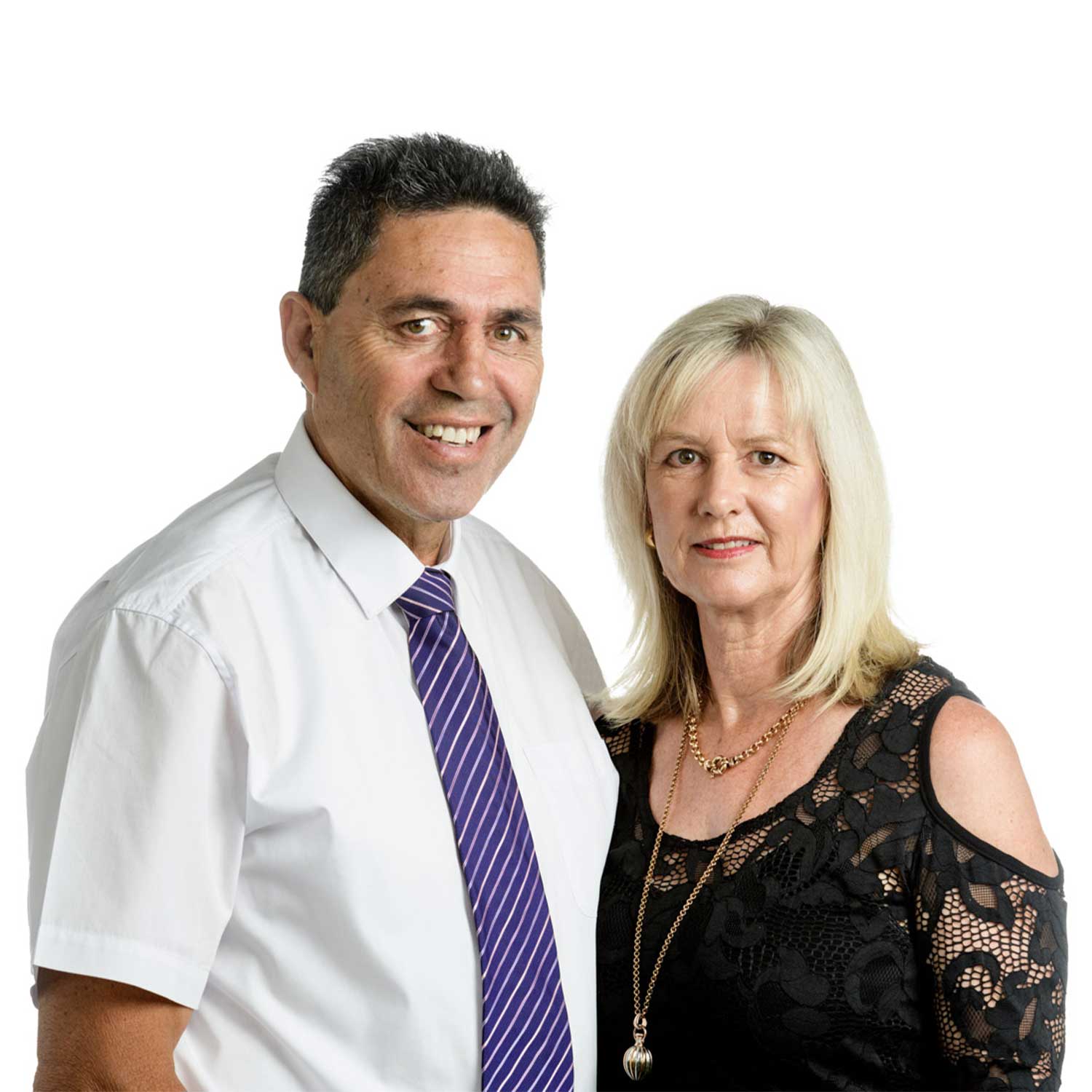 Jones & Company’s role is to relieve you from as much of the pressure of organising a funeral as possible and to ensure your funeral choices are arranged sensitively and professionally. 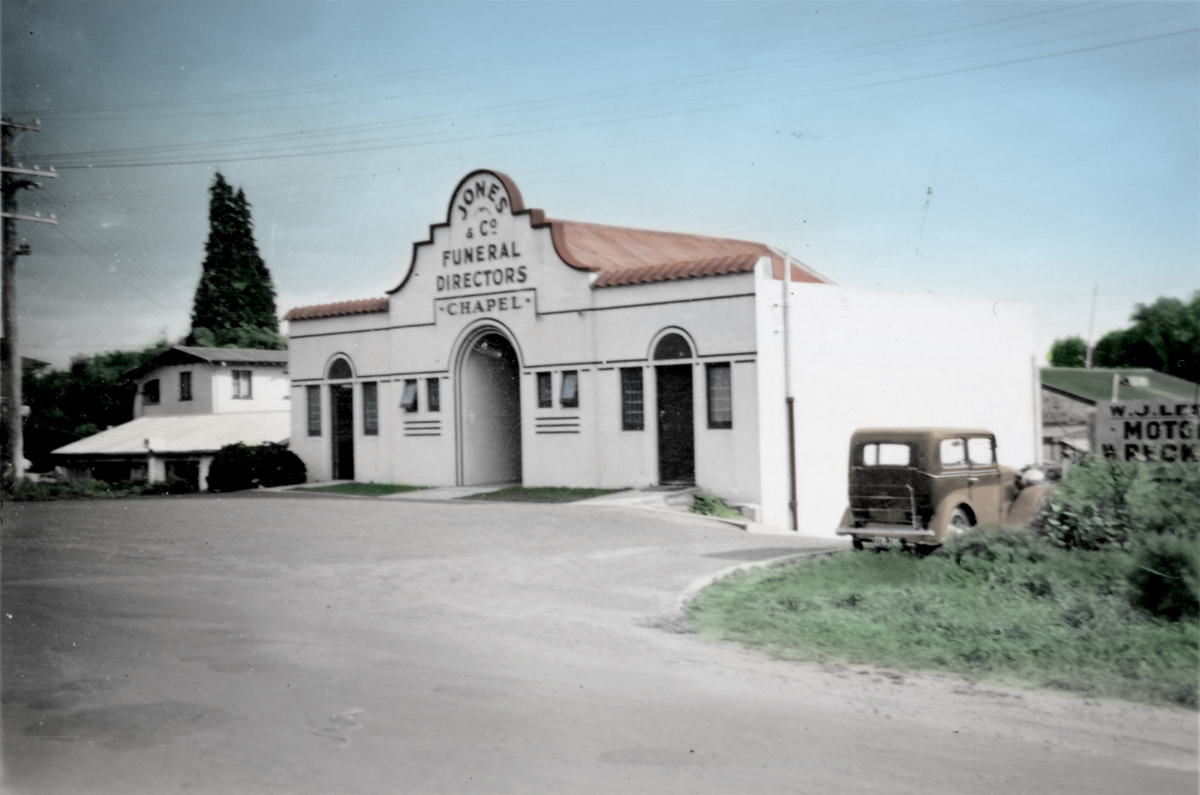 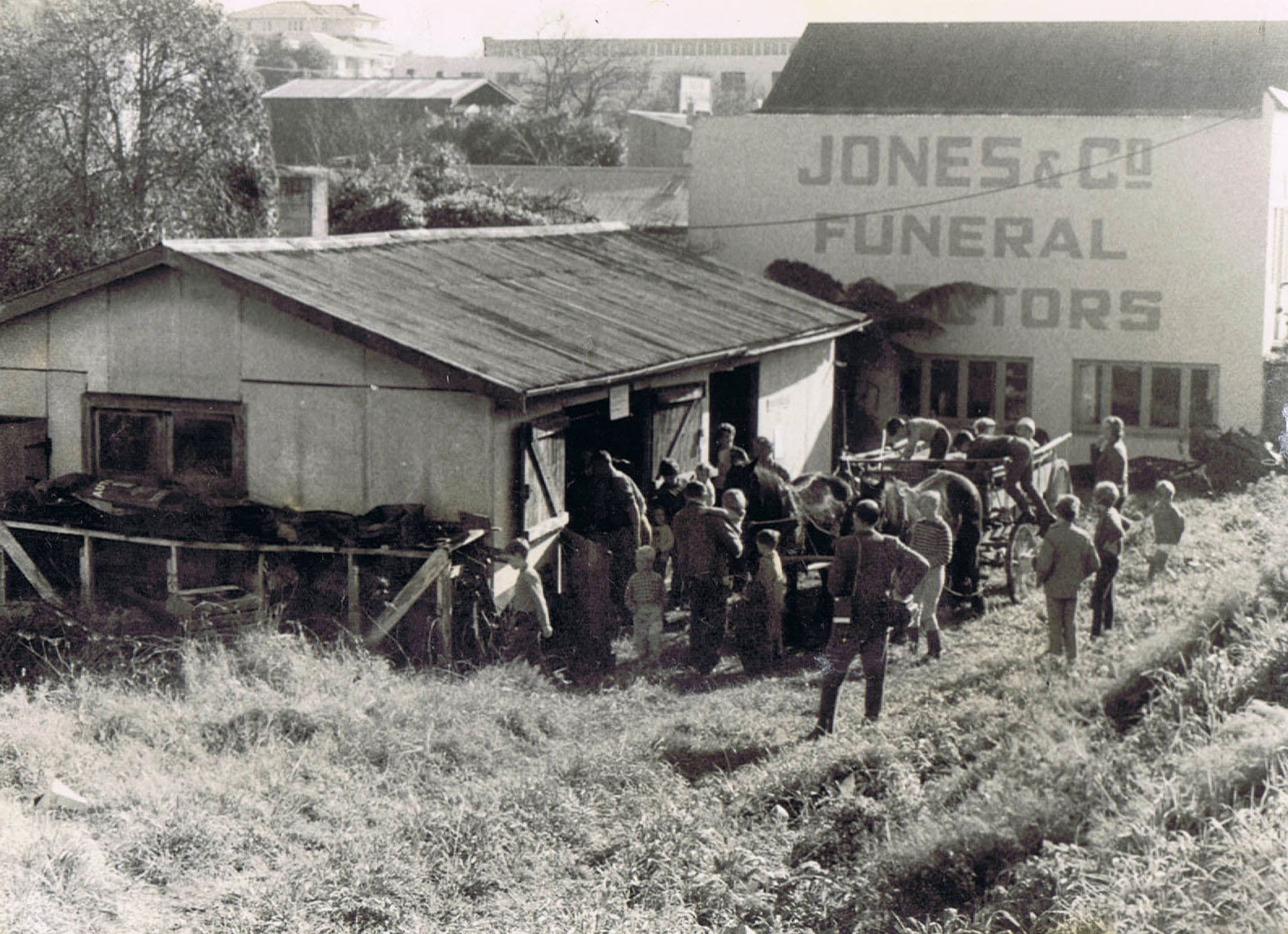 In 1909 Mr Hugh Jones opened a furniture business on The Strand. Furniture and casket manufacture were then closely associated and Mr Jones eventually added the role of funeral director to his duties. In 1910 the company moved to Harington Street, trading as the Tauranga Furnishing and Manufacturing Company. In 1913, Jones & Company added premises on Devonport Road, where the Goddard’s Centre is now located.

In 1938, Jones & Company opened a distinctive Spanish styled chapel on Grey Street, from where the firm operated until opening their Hillsdene Chapel in 1980 in Thirteenth Avenue. The Grey Street building still stands today as an iconic reminder of Tauranga’s early days.

David McMahon owned Jones & Company for twenty years, before sharing a 14 year partnership with Chris Andrews. Chris and Carolyn Andrews then purchased the Company on David’s retirement in 2014.

In 2019 Chris Andrews and Paul Gilmore purchased sister firm, Broadway Funeral Services in Matamata – with a view to strengthen links with our Waikato families.

With over 100 years of service to our local community, Jones & Company is the oldest funeral company in the region and continues to remain locally owned and operated and committed to serving our community. 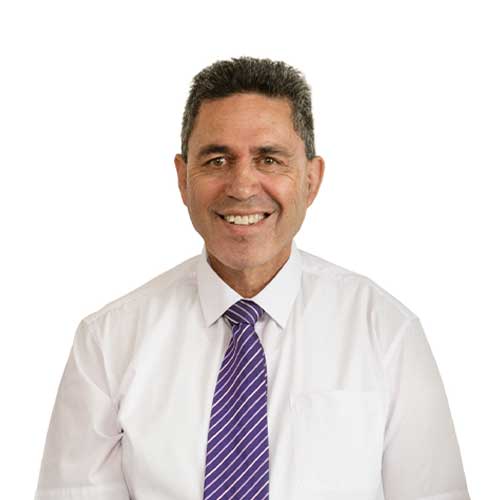 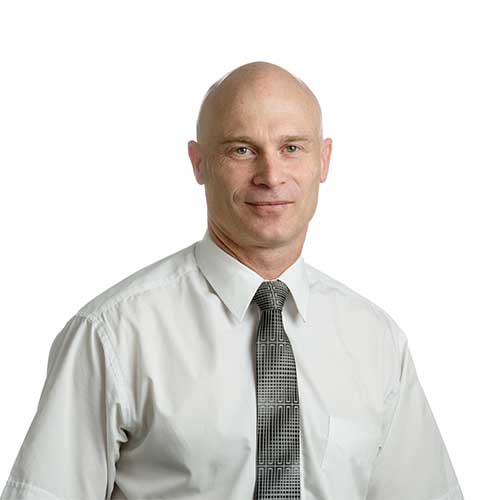 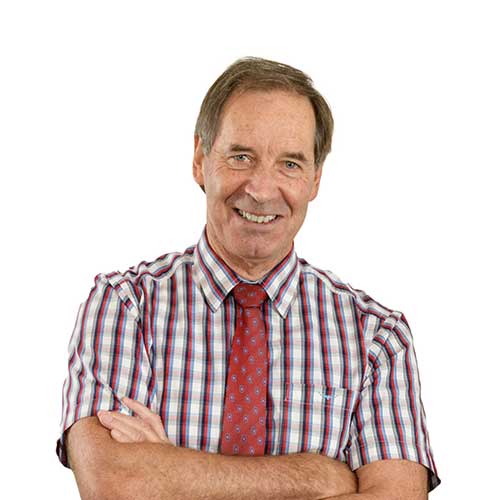 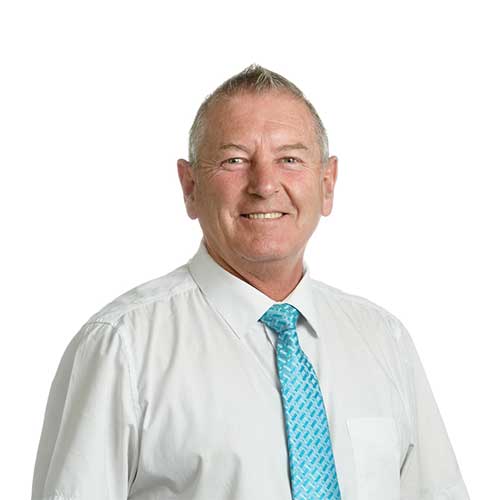 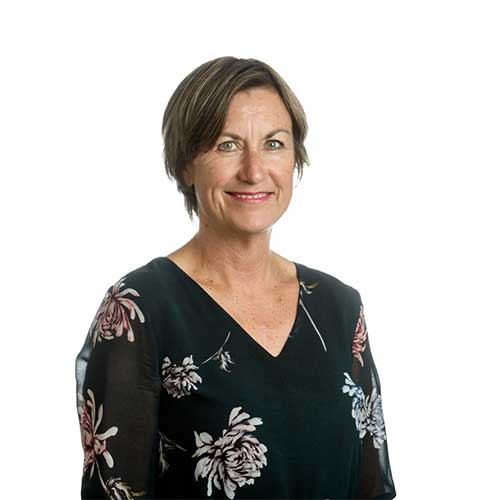 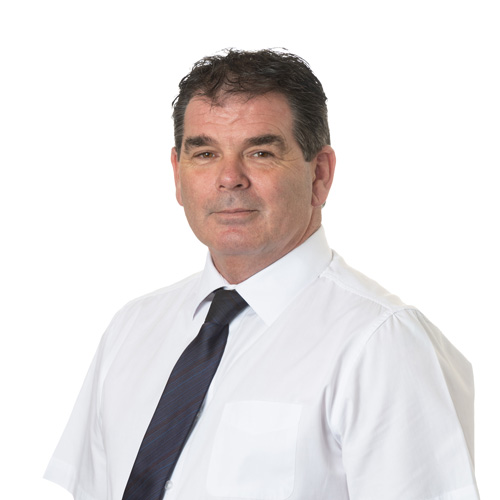 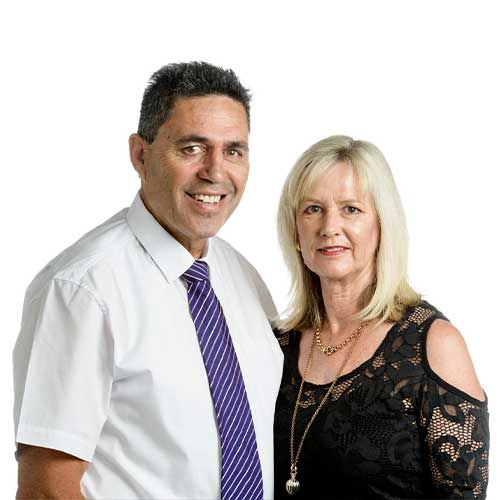 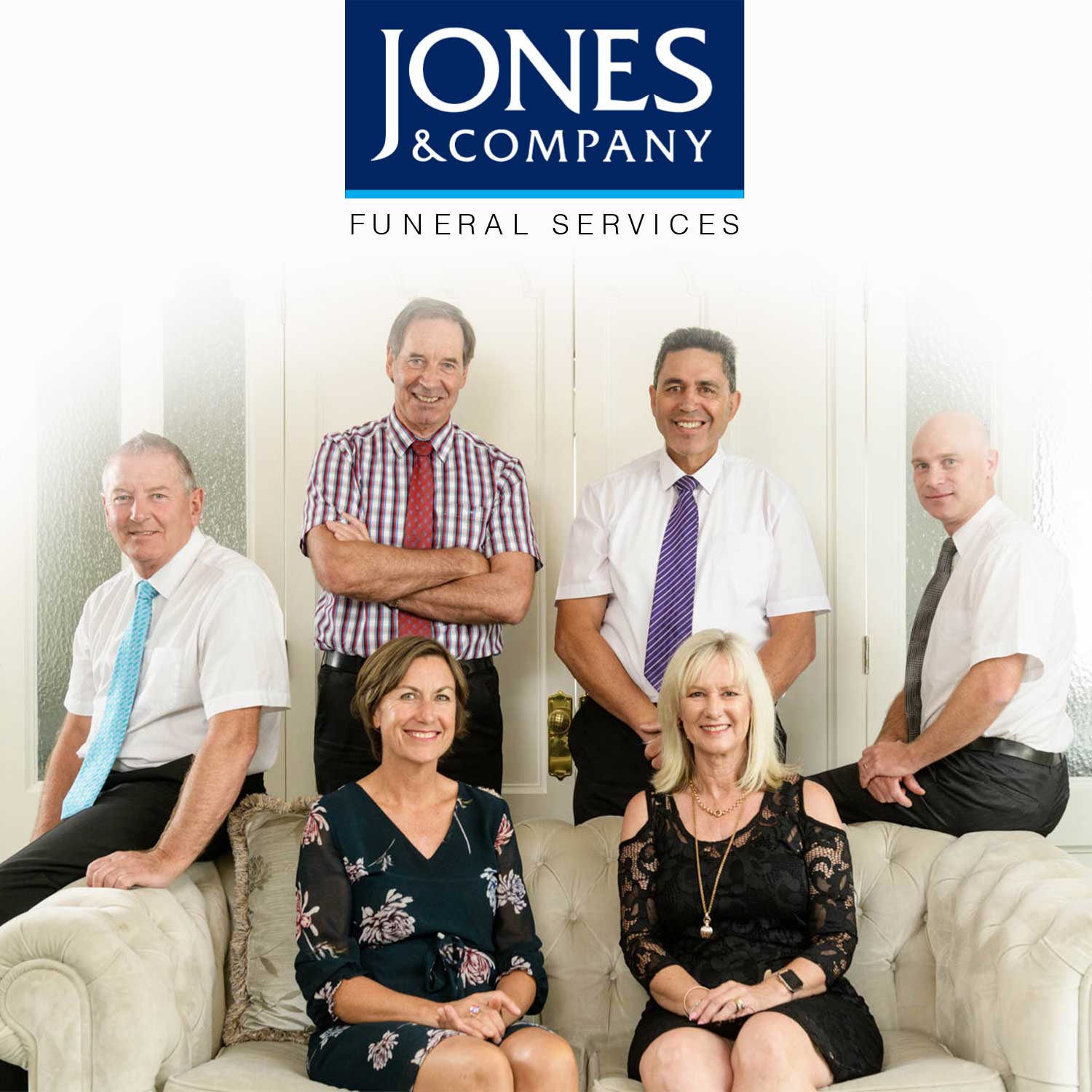 The Hillsdene Chapel is a purpose built funeral home and Chapel. The name Hillsdene comes from the historical Hillsdene area of Tauranga. Built in 1983, the Chapel has a seating capacity of 130 with an adjoining reception lounge for refreshments following the service. The air conditioned Chapel is equipped for data projection and livestreaming. The administration office, casket display area and preparation room are all provided in this venue. 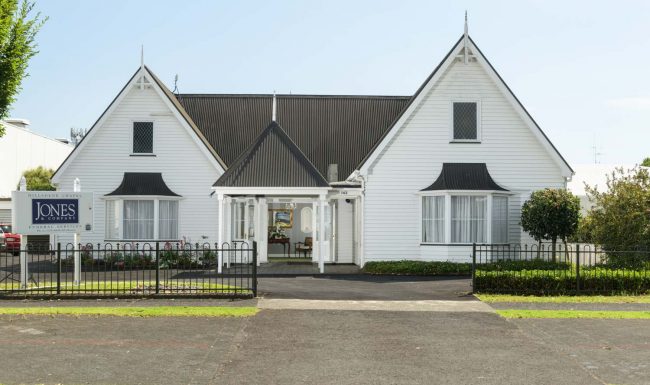 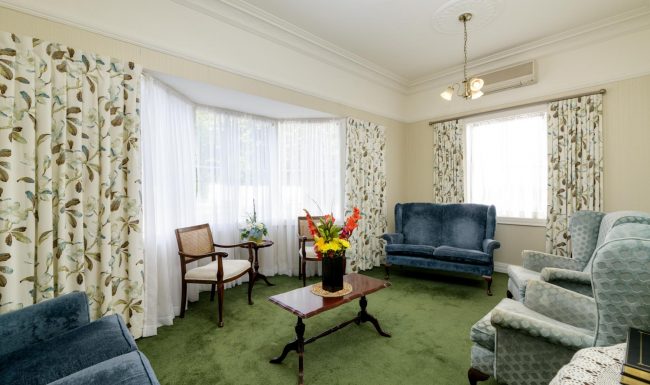 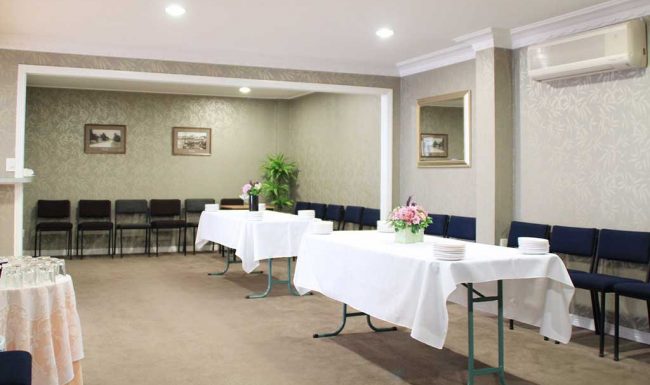 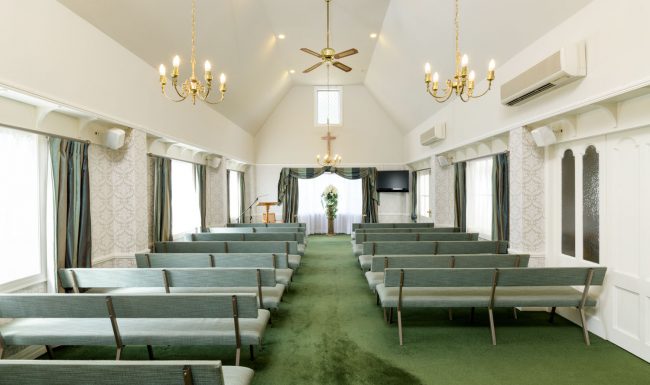 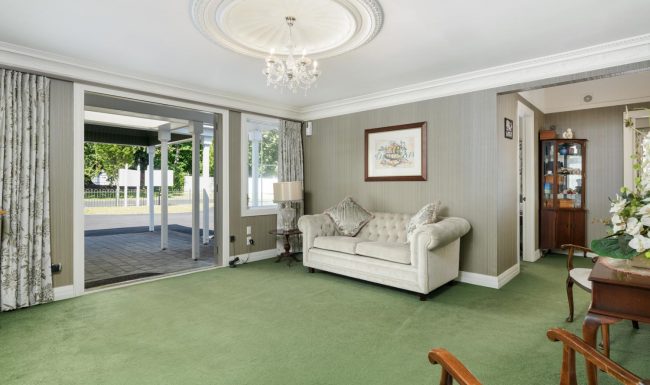 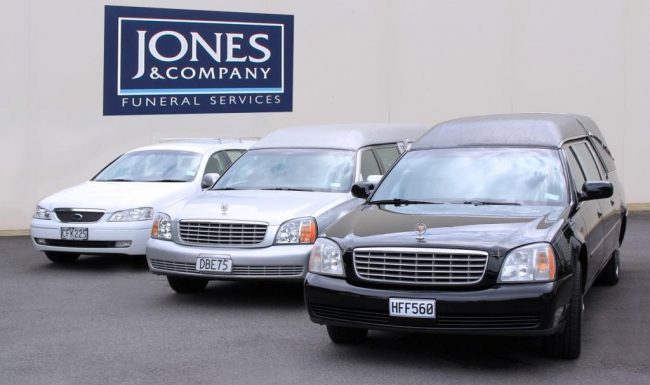 The Mount Harbour Chapel has relocated to the Old Methodist Church on the corner of Tawa and Puriri Streets, Mount Maunganui. Renovated, air conditioned Chapel, has a seating capacity of 120 with facilities for refreshments following a service, equipped for data projection and livestreaming. Our beautiful stained glass window, an icon of the original Mount Harbour Chapel takes pride of place in our new site. 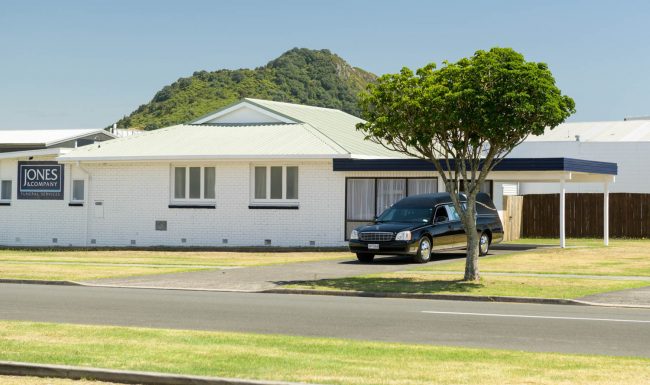 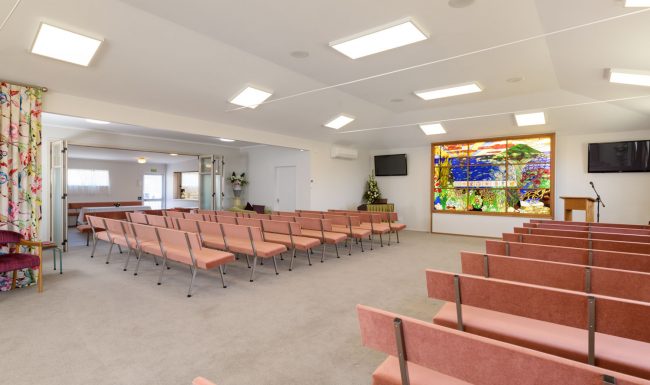 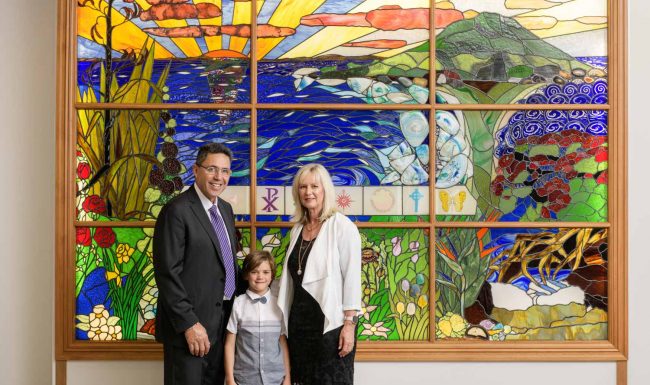 (operating from the Te Puke Methodist Church by appointment)

Located within the Te Puke Methodist Church with renovated lounges for family use, and the use of the Church for funeral services with permission and onsite facility for refreshments. 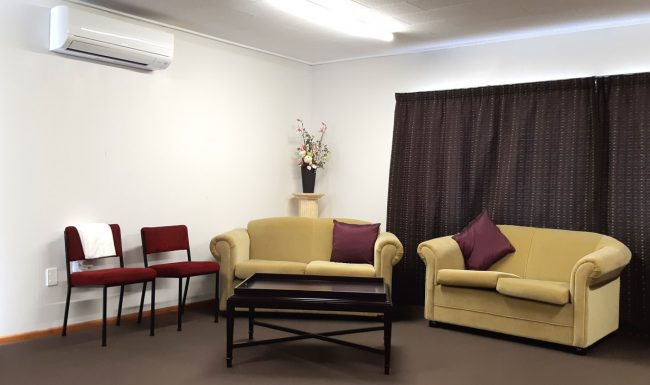 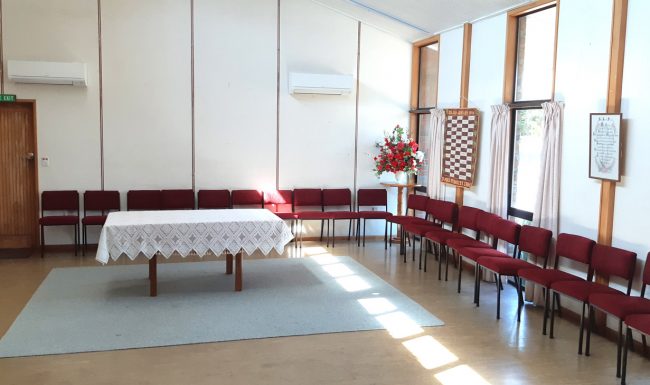 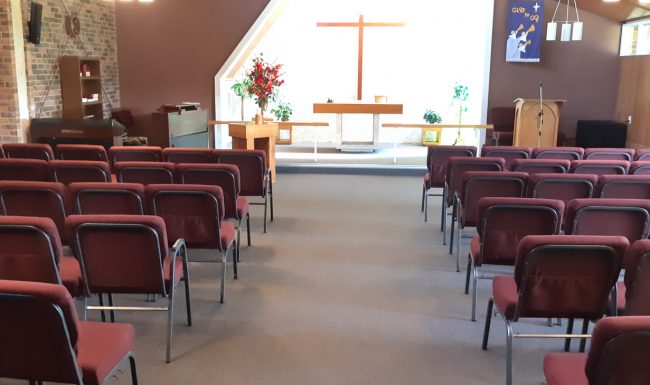 Dear Chris, We would like to express our sincere gratitude for your help with regard to the funeral and cremation of my stepfather, Harry Hagan. The different options you discussed, allowed us to bring the funeral in at a realistic budget and still meet our wishes for the service in full. At no point did we feel we were not in control of this service for Harry and all our expectations were exceeded. We were impressed with your personal, caring conduct, this was also displayed by your staff. During the gathering after the service, many of the guests commented on the professional and sincere way the funeral was conducted. We would have no hesitation in recommending your services to prospective clients who inquire as to your services.

Dear Chris & team, My family and I would like to take the time to send our biggest thanks and appreciation to yourself and your team at Jones Funeral Services. From the very first phone call your response to meet and set things in motions was immediate. Your guidance, support and advice was invaluable at a time when emotions were at their highest and in some cases family unable to comprehend the outlay upon the death of a loved one. We lost our Dear Mother after a short illness and the pain and sorrow is still immense. After meeting with you Chris, we knew our mum was going to a caring environment and knew she would be looked after with care and dignity. Once we arrived at your Funeral Home, your team and your self were so caring and attentive to all our needs. Helping and guiding our family from the moment you came to transport our mum to the Funeral Home to the picking of her casket to funeral notices in the paper. It truly made our loss that much more bearable. Our mum was beautifully laid out and this was commented on during the stay of her funeral. The caring didn’t end there, how pleased and humbled our family was that you took the time to travel to our mum’s final resting place in Putaruru to attend her funeral. Once again Chris from the Campbell Family (Maketu) thank you and we wish you and your staff well and we are very happy to recommend your services to anyone.

Hello Paul, Graham and I put the alarm on for 2.45am to open the computer in time to link up to the LIVE STREAM. Amazing technology. You enabled Jules to do a most beautiful funeral for Val. Everything looked like it went smoothly. Your filming was perfect. Jules’s chosen photographs were a wonderful collection and your slide show worked smoothly. Think the speech came over the sound system OK. Jules loved the contents and that was also Graham’s objective to help her out with a good speech. Everything from the care arranging the flowers at the moment of removal to the care to have Val’s two grandsons, Graham’s boys in front, was so well and so delicately done. We would like to thank you personally for your early morning starts to record Graham’s speech and you and your team for the top effort and top work you all did to make the funeral livable, moving, comforting and beautiful. Even from half way across the World. Thank you.